For more than 50 years mediamagnat Malcolm Forbes was collecting the artwork of Fabergé firm. In 2004 it went on sale on Sothbey's, London. The collection was purchased in full by Russian billionaire Victor Vekselberg and therefore was saved from being split and sprayed all over the world. Since then the Fabergé collection began to be replenished to become the world's largest. In 2013 It was decided to put it all on public display as Fabergé museum in newly restored Shuvalov's Palace, St Petersburg, RUSSIA.

Carl Fabergé created the beautiful baubles and objets d'art for Tsars Alexander III and his son Nicholas II, and the new museum bearing the legendary jeweller's name houses nine Imperial eggs (second only to the 10 in the Kremlin's Armoury), plus five non-Imperial Fabergé eggs and some 4000 other pieces by Fabergé and fellow master craftsmen and women of pre-revolutionary Russia. 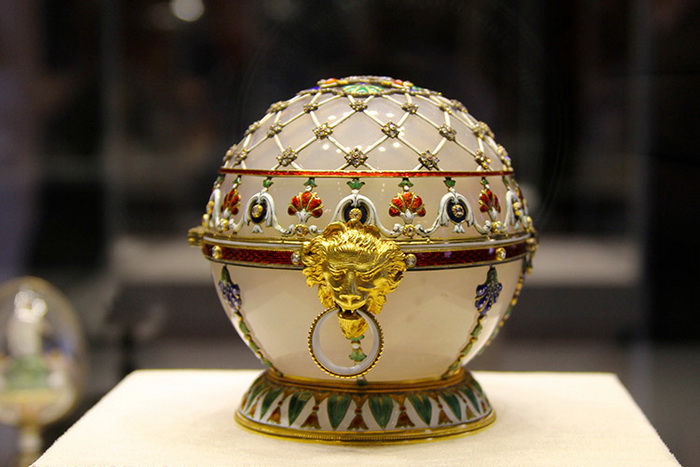 The Renaissance Egg: The tradition of tsars giving their wives jewelled Easter eggs began in 1885 when Alexander III commissioned the 37-year-old Fabergé to create a present for his Danish wife Maria Feodorovna. The Empress was delighted and, from then on, Fabergé was given a free hand in his designs for the eggs. The Renaissance Egg, crafted from jewel- and gold-encrusted agate, is the one Alexander gifted Maria in 1894. 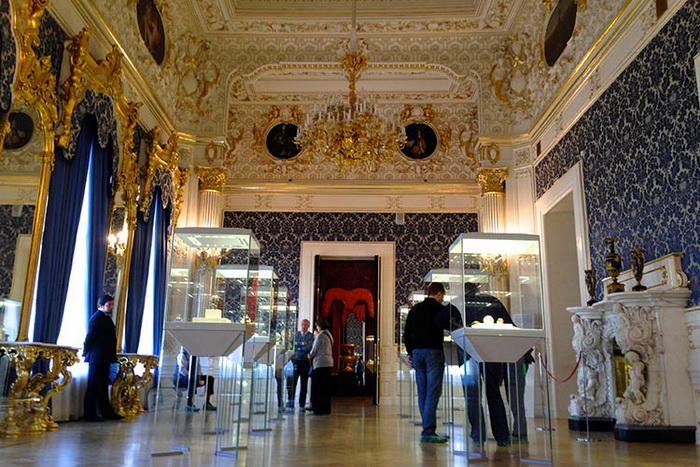 The Blue Hall: After entering the Shuvalovsky Palace and climbing the grand staircase beneath an egg-shaped dome, the tour kicks off with the star attractions: 14 Fabergé eggs plus a few other ornaments in the Blue Hall, a treasure in its own right with sumptuous gilding and moldings, and original roundel paintings. 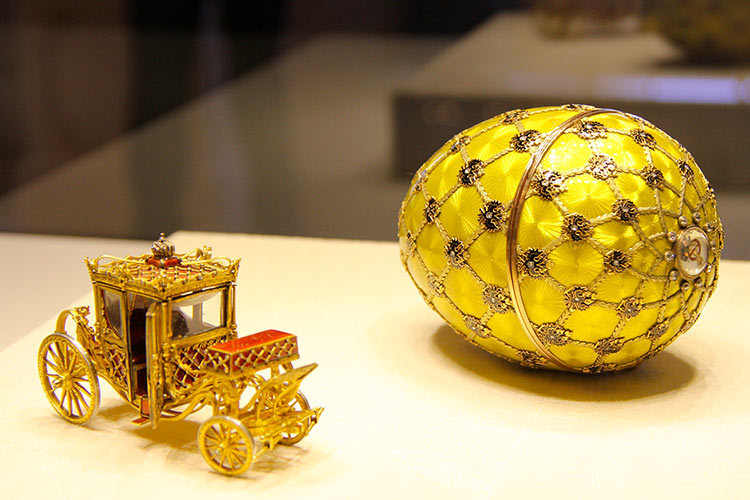 The Coronation Egg: From 1897, Fabergé was tasked with designing two Imperial eggs each Easter - one for Maria Feodorovna, who after the death of her husband became the Dowager Empress, and one for Alexandra Feodorovna, wife of the new tsar Nicholas II. The ‘surprise’ of the Coronation Egg, made to celebrate Nicholas’s coronation in Moscow in 1896, is a detailed replica of the 18th-century carriage that carried Alexandra to the coronation. 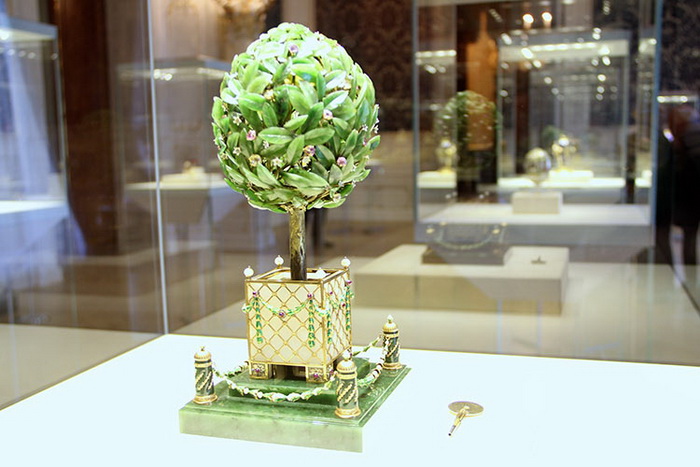 The Bay Tree Egg: Symbolising everlasting love, the Bay Tree Egg was presented in 1911 to the Dowager Empress Maria in celebration of the 35th anniversary of her arrival in Russia from Denmark. It has 325 nephrite leaves and is studded with rose diamonds, amethysts and citrines, a type of quartz. The surprise is a mechanical golden bird, decorated in real hummingbird (colibri) feathers, that rises out of the top of the tree, flaps its wings and sings. 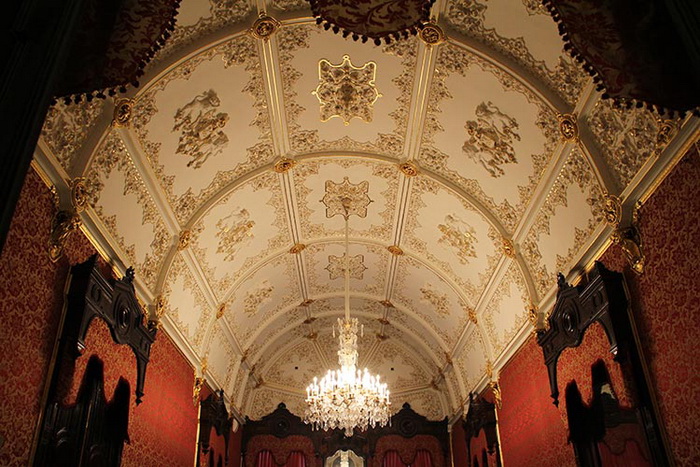 The Red Hall: After the Blue Hall, the tour continues through more grand rooms around the palace. The Red Hall, containing silver pieces made by Fabergé such as an animated sculpture of a troika and a tea service made for the Grand Duke Konstantin, bears the one-headed eagle emblem of the Narishkin family who lived in the palace prior to the Shuvalovs. 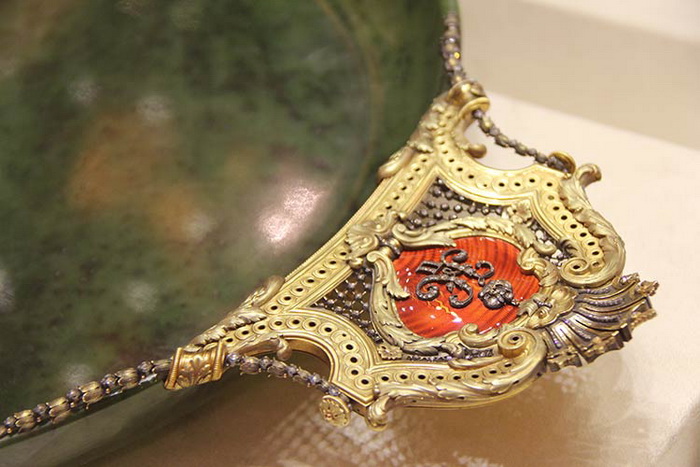 Detail of Jade salver, made by Fabergé: Display cases in the Gold Hall, which was once the palace dining room, are packed with small presents and trifles including figurines, snuff boxes, cigarette cases and picture frames, made by Fabergé for the Imperial family, relations and friends. This bowl is carved from a single piece of jade from the Urals, Fabergé’s favourite stone. 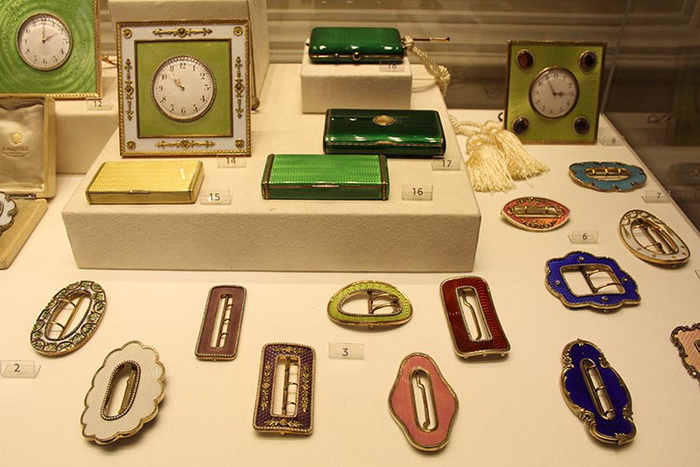 Belt buckles, cigarette cases and clocks: Fabergé founded his jewellery business in what was then Imperial Russia’s capital in 1842. At its height, he employed 700 people across many factories, four shops in Russia and one in London. His products were also shipped to Tiffany in New York. Small enamelled items, such as these ladies' belt buckles, meant that a piece of Fabergé was affordable for the masses. 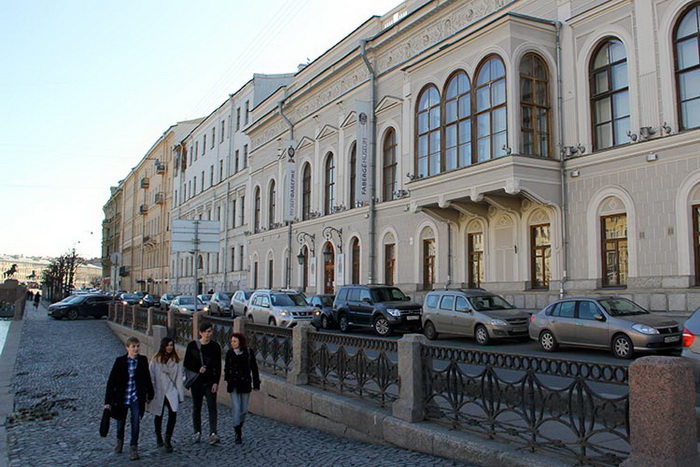 Shuvalovsky Palace, Fabergé Museum: Built at the end of the 18th century, the Shuvalovsky Palace faces the Fontanka River, less than 200 metres from the Anichkov Bridge. In Soviet times, the palace was the House of Friendship, a meeting place for international delegations. Now hosting the Fabergé Museum, the palace is destined to become a magnet for art lovers from around the world. 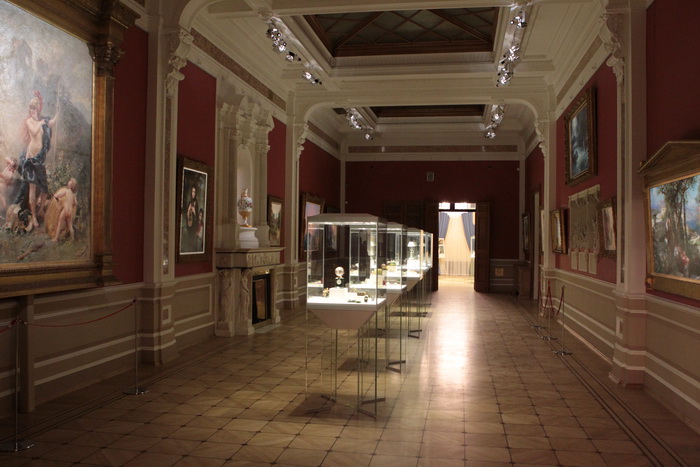 The hour-long guided tours of the museum should be BOOKED WITH US at least two weeks in advance. With just 15 - 20 tours a day, and a maximum of 18 people on each tour, demand is expected to be high, particularly as St Petersburg nears its peak White Nights season.

The Hermitage and the Catherine Palace and Gardens
Josephine S. V., Plano, Texas, USA
Our group of 10 was the perfect size. The guide spoke excellent English and was very knowledgeable.
read more
MaxiBaltTours is ⭐️⭐️⭐️⭐️⭐️ plus!
Sandy Scherner-Leddy, Long Island, New York, USA
Thank You and MaxiBaltTours for our Fabulous Baltic Cruise Experience in every port we traveled to! The memories we have Are unforgettable
read more
All reviews
Celebrity Apex day and a half St Petersburg shore tour
We have designed our Celebrity Apex day and a half St Petersburg small group shore tour itinerary
read more
St Petersburg cruise schedule for season 2022
St Petersburg passenger port is ready to host more cruise ships during 2022 season.
read more
All news